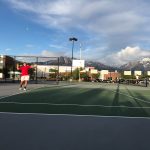 The boys’ tennis team wrapped up the Region VI season with the Region Championships last week. Originally scheduled to start on May 7th, the two day tournament was pushed back a day due to rain. After lightning cut the first day short, the finals finished up well into the night of May 9th. When the last matches were completed, East had Paul Parkin (1st singles) and the team of Mike Grant and Jake Spencer (1st doubles) qualify for the UHSAA 5A State Championships. The first two rounds of that tournament will be held at Liberty Park on Thursday, May 16th with the semifinals and championships decided on Saturday.
GOOD LUCK AT STATE!!!

No Events This Week

Events are added by athletic staff.
View All Events